Our collection of memories would not be complete without including the canine contributions to Baldpate! The Smith family has been blessed to share life with a long line of German Shepherds.


Perhaps the most famous, Duke, was a guest and employee favorite for many years. After a quick assessment, his friendly nature was soon evident in wagging tail. Unless, of course, you were up to no good, or you were the UPS delivery man. With a bark to deter any intruder or mischievous escapee, Duke was a formidable security officer, especially to errant chipmunks. However, even staff that were initially afraid, or came from a culture unaccustomed to having a dog around, found Duke to be endearing and sweet.

Mackenzie’s German Shepherd, Leika, was often around the Inn, and despite photographic evidence, was very helpful!

The Inn’s current resident German Shepherd is Moose.  At two and a half years, he still has some learning to do, but has undoubtedly captured our hearts. And some keys, as you can see! 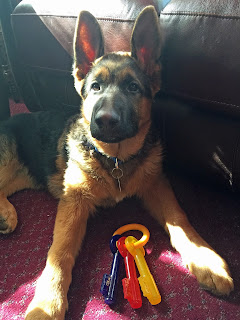 Other dogs that have spent time at The Baldpate Inn have been horseman Chuck Malone’s dog, Buster, and maintenance man Paul’s dogs, Brown Dog and Black Dog.  And of course, every rotational staff gets the chance to be dish dog!

The Smith family is not the only one to connect Baldpate and German Shepherds as a key part of Baldpate! This photo of “Smo-key” the neighborhood pal was presented to Mr. and Mrs. Mace in 1937, and has secured a place in the Baldpate Key Collection since. 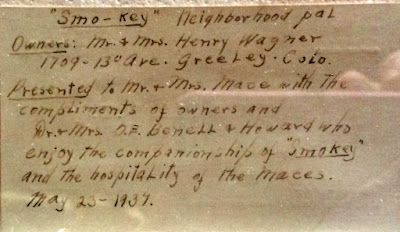 Do you have a favorite memory of the furry friends that have made Baldpate such a special place?