It is really fascinating that way up in the Rocky Mountains, water has been such a recurring theme at Baldpate.  From our Big Thompson Water project key, to our floods, to the challenges of providing water at 9,000 feet elevation with our Baldpate water system.

Ever wonder how to get water from one side of a mountain to the other?  Our Key Collection has part of the answer.

The Big Thompson water project did just that in the Colorado mountains, and we have a key and key hole donated in 1944 from that project. 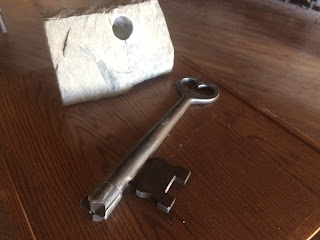 "This key was presented to Baldpate Inn through the courtesy of S.S. Magoffin Company.  This key was forged from the last piece of drill rod, drilling the last hole in the last round of the Alva B. Adams Tunnel.  This drill rod was removed from the ground at a point 42,994 feet from the tunnel portal; the longest single heading known to engineering history.  Forged and finished by James B. Pearce”

Water coming and going for The Baldpate Inn has had its challenges as well.  When we bought the Inn, our property was part of a development project, Baldpate Estates, which had its own metro district for water and sewer. For the first several years, they furnished these utilities for us.

Not to be too graphic, at the time we were using holding tanks for our waste, but since our business grew rather quickly, we were all surprised when the tanks couldn’t keep up and another solution was needed.  First we went with our own septic field but ultimately ended up with the “flush & forget” (as they called it) attachment to the Upper Thompson Sanitation District. Let me tell you a two mile long 1,500 foot drop service line is not cheap to put in the rocky mountains!

In the meantime, the Baldpate Estates was phasing out as an entity and with it, much needed maintenance to the water system. I’ll never forget Father’s Day 1998, with 200+ dining reservations, and we ran out of water!!  We struggled for several hours, using every dish and piece of silverware we owned, but ultimately had to close and call our guests to cancel.

A very long story short, along with another bank loan later, today we are blessed to have our own water system. Our system includes two adjudicated wells, a 40,000 gallon holding tank, and an augmentation plan that entailed answering (and thankfully winning based on historic use) a water rights court case filed by the US Government against me as property owner.  And as a bonus, I have managed to somehow maintain my licensing as a Class D Water Operator (I know that means nothing to most of you, but let me tell you, even counting my college Chemistry days, it was the hardest test I ever took!)

So water, water everywhere……  I’m remain thankful we have some to drink!