My staff always rolls their eyes when I share “Life Lessons from Lois” ~ like unless you want glitter forever, don’t have Prom at your house. In 1995, for my son MacKenzie’s junior year, we agreed to host the Estes Park High School Prom at the Inn. Now put aside the fact that we don’t normally open until the end of May, an April prom is a challenge on several counts, the weather being a huge one!  That year, we had lots of late snow and so just getting into the building was a challenge. I remember hooking a hose to the hot water tanks to help melt the three foot stack of snow and ice blocking the drive thru under the porch! 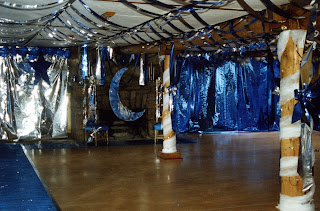 Then of course since we needed an inside dance floor, we removed all the tables from the dining rooms (have no clue where we actually put them) and decorating commenced. It was quite the transformation!  Evidently it went well, according to this Mountaineer story. 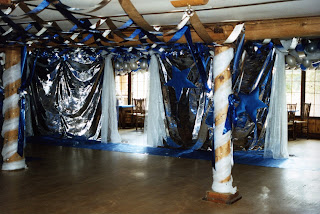 An extra special guest to the 1995 Prom was our Estes Park Mayor at the time, Bernie Dannel and his wife. What a fun discovery had been made, that 55 years prior, his 1940 Estes Park High School Prom (then called Junior Senior Banquet) had been held at Baldpate Inn!

I especially love the invite, with time for “shagging” after the dinner and program. The class roll lists read like an Estes Park who’s who from days gone by.

Don’t you wish I’d asked Mayor Dannel if he had a copy of his speech, “Reflections of The Deep?”

So actually I guess I don’t really know, was the glitter you occasionally notice on the Baldpate’s Dining Room floor from 1995 or 1940?