Today, we turn our eyes back in time, to the Mace family soon after they set up their Homestead. The Maces had a natural gift for hospitality which would shape their future, and the lives of many they encountered.

In those times, traveling was not easy or quick. Although the Baldpate property was located in the remote mountains of Colorado, the Maces were not destined to be lonely or have much "goof off" time! A stream of hikers and travelers passed by on the road, and the Maces provided lodging and meals to folks so often that it inspired the construction of several “tourist cabins.”

Ethel Mace described the decision this way, “We decided to build a hotel or inn because it seemed that the guests might prefer to be able to eat and sleep here without having to worry about supplies. It was kind of funny because neither of us knew anything about hotels. I had been in one once and Gordon had about three or four times. We bumbled along though, and when we had finished, there were more guests than we could accommodate.”

The Mace family utilized their considerable talents and applied them to the surrounding natural resources to create the cabins and eventually the main lodge, building them by hand from hand-hewed timber cut from the property.

Over the years four guest cabins were constructed and remain popular guest destinations to this day.  While so far, we have not found accurate building records, we’ve pieced together the most likely development in our Seven Keys Armchair Tour.

Just to the west of the Homestead, our Twin Sisters cabin is believed to be one of the first “Tourist Cabins” built. As you may detect from the framing of “twin” doors on its front porch, this cabin was originally a duplex cabin, each with one small bedroom and bath.

Twin Sisters cabin was updated by the Smith family in 2002, while Jen and her husband Pete were working at the inn. Pete jumped right into our family’s do-it-yourself methods, never shying from the challenge. Twin Sisters is now an updated delightful four person cabin, with a cozy gas fireplace, luxury bathroom with “twin” headed shower.

East of the Homestead is our Pinetop cabin, which we believe predates the Baldpate main lodge as well.  It was originally a two bedroom cabin that was renovated in the 1990s.  Nestled in the pine and aspen forest, Pinetop is now the perfect sweetheart getaway with its queen canopy bed, sitting area with gas fireplace, whirlpool tub for two, and a delightful outdoor porch with rustic railing.

Our Wrangler cabin was initially our most primitive cabin structure with just a stone fireplace for heating and a partial dirt floor. We are guessing it was originally the living quarters of the Baldpate Stables horsemen.

One of the most colorful characters involved at the stables was Chuck Malone. His name is carved in the wooden mantle above the fireplace, along with what could be the Baldpate brand. Tune in for a future post to learn more about the Baldpate Stables!

In the 1980s, our Wrangler was also the home of the Baldpate Metro District’s handyman, Paul and his two dogs, Brown Dog and Black Dog.  Paul always had a story to share and checked in daily to see if there was leftover pie that needed to be eaten (most often with a generous helping of ice cream).

The Wrangler cabin was renovated by the Smiths in 1995.  It is now a delightful two bedroom cabin with original antique tub and native stone wood burning fireplace.

Since the roof of our Valley View cabin is visible in some of our earliest photos we think it was constructed shortly after the main lodge, around 1921. Charles Mace used it as a home before his Tikitiboo homestead was built near the top of our driveway.

Valley View was also known as “the Mitchell Cabin,” derived from a family who rented it each summer for a number of years. In the 1990s, this cabin was the favorite of actor John Ritter, of Three’s Company fame, where he stayed with his family each summer at Baldpate. 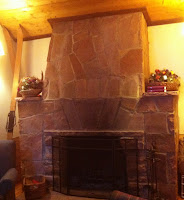 Our Valley View cabin was the first big renovation project for the Smith family in 1989. Updated heating was added to create our delightful three bedroom cabin. Still, history shines in the original unique red stone fireplace and seriously long skis used now as only as wall decoration.

So, when you are ready to "goof off," which cabin will be your favorite?