Day 28: Six Degrees of Separation in the Seven Keys

The connections in space and time that exist within The Baldpate Inn and its key collection are staggering. With over 30,000 keys in the collection and nearly 100 years of history, what connections could you have? 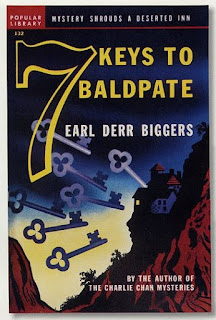 As you will recall from our yesterday’s post about the history of The Baldpate Inn’s Famous key collection, legends say author Earl Derr Biggers visited the Inn and was thunderstruck to see that this very real place was exactly what he had imagined when writing his mystery novel, The Seven Keys to Baldpate.

In 2013, Dr. Richard Kelley spent an afternoon with his wife, Linda, dining at The Baldpate Inn.  The Baldpate Inn has always been a family business, and Richard had grown up working in a family-run hotel in Waikiki, Hawaii, opened by his parents in 1947.  The name of that hotel was The Islander Hotel, and it was where his parents, Roy and Estelle Kelley, launched the prestigious Outrigger Enterprises.

During their lunch, Richard and Linda spoke to Lois Hoke Smith, owner and innkeeper, and asked if The Baldpate Inn’s key collection could possibly contain a key connected to Outrigger Enterprises. Lois escorted Richard and Linda to the Key Room and together they looked and looked. To Richard’s amazement, they found a key and key tag for Room 15, The Islander Hotel!

“Finding that key at The Baldpate Inn was very emotional for me,” Kelley says, “particularly because one of my early duties was to cut replacement keys when they were lost or not returned by guests.” Could this very key have passed through his hands years before?

If that wasn’t enough of an amazing connection, author Earl Derr Biggers also visited Waikiki, the hometown of Dr. Kelley in 1925, where he was inspired to create the character Charlie Chan. Read more of that story here from this article in the 2014 Honolulu Star.

And finally, if that wasn’t enough to convince you that perhaps there’s a link to everyone in The Baldpate Key collection, read Dr. Kelley’s “The Rest of the Story” to discover another key connection to The Baldpate Inn!