Day 46: Seven Keys to Baldpate: The Book, The Play, The Movies, the INN

The Seven Keys to Baldpate is a story that has captured the imaginations of millions and literally shaped history! 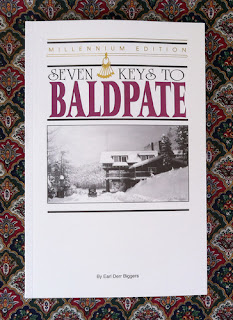 First conceived as a novel, written by Earl Derr Biggers (also famous for creating the Charlie Chan series), The Seven Keys to Baldpate was initially published in 1913.

The story is of an author seeking solitude to write his next book. What better place than a closed summer inn, clinging to the side of a mountain, in the dead of winter? However, surprise visitors with keys bring mystery, burglary, gunfire and could-it-be love?!

But the book was only the beginning!

In 1917, it inspired the naming of The Baldpate Inn in Estes Park, Colorado, as it was the perfect match to the description of the hotel in the story!  And soon our Key Collection was begun, with Biggers himself donating “The original key to Baldpate,” noting that, “All others are imitators.” 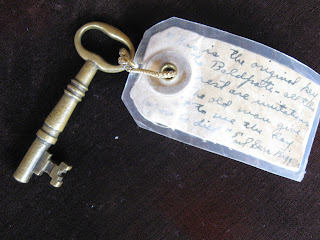 The fascination with this story started early and continued in many formats.

The renowned American playwright George Cohan created the stage-play version, which opened in New York in October of 1913. Interesting to note, when the leading man was hurt in a horse and carriage accident, Cohan himself starred in the three opening performances of his play.

The play has been performed several times at the Baldpate Inn’s Key-thedral Theatre. Although more recently the boards are tread by professionals, I remember fondly my stint as the slightly-crazed hermit in an all-staff production. (Type casting? Perhaps. Just because no one else was crazy enough to run barefoot along the wall behind the fireplace…) 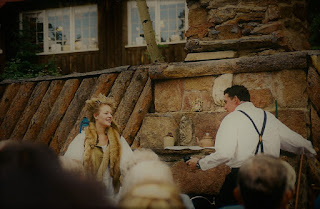 Several adaptions of The Seven Keys to Baldpate were also made for the silver screen.  (And if they make it again, I'm sure they'll ask me to be Hermit again!)
Not to be missed is the radio theater version starring Jack Benny and Mary Livingston, which we often have playing in the Key Room during our season.

As you can see, this is a story that has captured the hearts of many throughout the years.

Stay tuned to our upcoming 2017 Theater Events to see how you can experience the mystery and intrigue of the Seven Keys for yourself!