Baldpate really has a trifecta of collections: Keys, Photos, and our yet to be charted, Guest Registers from as early as 1918.  A long-term goal to help round out our history is to tie together the keys, the photos, and the guest registers.  So there is still lots more to do!

As our American History Savers volunteers worked to preserve and catalogue the boxes of “stuff” in the Baldpate's archives, they suggested we reach out to local historians for help as well. 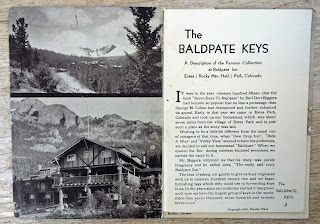 John Meissner was one of those generous people willing to research.  At one of our first meetings with John, he shared a huge inconsistency that he had discovered in our Baldpate story.  In 1938 Ethel had written in her book that Baldpate’s first year was 1917, so we had just assumed that as fact. What John had uncovered was clear documentation that the Main Lodge of our Inn was really not opened until 1918. It was one of those light bulb moments for me, since we did have all the original guest registers and the first was 1918!  Why that never clicked for me before, I don’t know!

As we continued to dig, you can imagine our delight when we came across the very tattered Kansas City Star newspaper article that names our Homestead “Baldpate” and gives some understanding of Ethel’s 1917 claims. Although the main lodge did not open until 1918, the Mace’s were housing guests in “tourist cabins” in 1917.

Guess I really should have been more discerning. I clearly remember the first winter after we had purchased the Inn, taking these treasured guest books home to look for names of royalty that might have visited Baldpate.

I did have to laugh at myself when reading the lists of names as I perked up when I found a Count – alas it was only “Count de Silverware,” but what was even more fun for me was to find the name of the “rich” people from the tiny farm town in southwestern Ohio where I grew up. 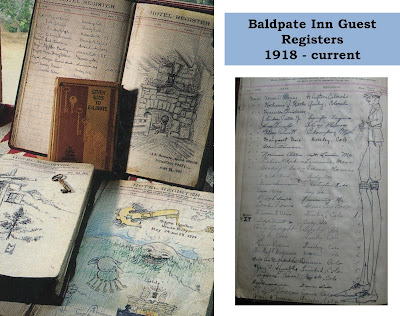 Doodling is clearly not a new art form, as our guest books are packed with sketches and drawings, some by noted artists as well as some that were likely doodles of bored employees???  The margin of the Baldpate Inn register from August 1920 includes an impromptu Gaar Williams cartoon by the prominent American cartoonist.   Local artist Dave Stirling who works at the lodge, was a prolific contributor of sketching entries as well.

In recent years, our guest registers were real “keys” when trying to unravel the history and construction dates of our buildings. As room numbers were added, the registers told the history.

It will definitely take more detective work, as really just the tip of the iceberg has been uncovered with the vast amount of information these books likely contain.

One can only imagine the truths that will be unveiled as we move forward to document these Baldpate guest registers in years to come.