Day 100: Postcards from The Baldpate Inn

Day 100! A perfect day to make note of and share with a friend! What better way than a postcard? We’ve talked about our artistic marketing and merchandise, but one of our most popular keepsakes are Baldpate Inn postcards.

As far as I have discovered, we’ve had at least five different series of Baldpate postcards: Early bordered, Albertype, Hoffman, Sanborn, Dexter and our own from 1990s.

It is interesting to note the variety of finishes that have been applied to several postcards versions. Since I love the watercolor look I think my favorites are the Albertype hand colored series of seven (of course) cards.  Wish they all had dates!

The earliest (I believe) of our Albertype set lists Clatworthy as publisher, and since the Key Room and second story West Wing are missing, they were before the 1935 addition.  The rest of the Albertypes note Baldpate Inn as publisher.

With the growth of our pine trees, until just recently, it was almost impossible to duplicate the angle of some of the photos, especially with Longs Peak in the background. 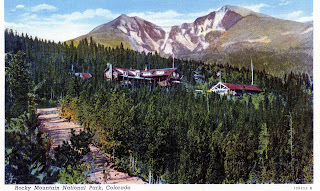 Looking at this early 1 cent card with Mt. Meeker and Longs Peak in the background, I do have to admit to wondering just when folks started to get creative and "Photoshop" their pictures. Compared with our most recent aerial drone photo, those mountains seems a little out of proportion to me, what do you think?

Not yet a postcard, this newest (and my current favorite) aerial drone photo will be available this birthday season as a puzzle. 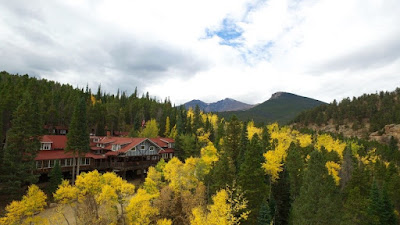 So stop by and grab a few postcards or a picture puzzle to mark your adventures at Baldpate Inn celebrating our 100th summer.

And stay tuned for one more bonus blog tomorrow!